Whether building a new network or upgrading one, generic speed testing is a must. It is important to have testing controls to create baselines so that true and expected speeds can be properly evaluated.  Use proper software for this testing, such as iPerf or WiFiPerf / WiFiPerf Professional as well as something like fast.com to tests internet speeds from different servers around the world.

Let's start with some definitions.

Throughput is the amount of data moved successfully from one place to another in a given time period. Achieving maximum throughput speed is dependent on various aspects of the network, its devices, and the testing environment.

Bandwidth is the maximum amount of data that can be sent over a medium. These numbers are usually theoretical in pristine environments. While the internet speeds Internet Service Provider (ISP) sell to customers are in Bandwidth, most customers will not achieve these speeds.

Megabit is a unit of data commonly used in speed testing to denote speed (Megabits per second). Eight Megabits is equal to one Megabyte.

Megabyte is a unit of data commonly used in speed testing to denote the size of the item being sent/received (MBs).

Download Speeds represent how fast data is delivered to your computer in a second, usually measured in Megabits per second (Mbps).

Upload Speeds represent how fast data is sent from your computer in a second, usually measured in Megabits per second (Mbps).

Local Area Network (LAN) is a network in a (usually) small geographic area, such as a home or office. Example: testing speeds from your computer on your home router to another device connected to the same router. Commonly referred to as local speed.

Wide Area Network (WAN) is a network that (usually) spans a large geographic area, such as offices across a country or the internet. Example: testing speeds from your computer on your home router to a website like Netflix. Commonly referred to as internet speed.

When you get down to it, speed testing is the same for all environments. You’ll test wired to wired, wireless to wired, and then wireless to wireless in order to compare different speeds and help narrow down any issues. While the testing process won’t change based on the network’s environment, it is important to understand that there are certain limitations to consider when speed testing an office network compared to a home network.

Speeds can be limited by the network’s equipment. So, in addition to testing, consider if any of your equipment might need upgrading.

Access Point – This is a device that directly connects to a wired LAN, typically with the usage of Ethernet. The access point (AP) provides wireless connections using wireless LAN technology, also known as WiFi.

Router – This device determines the best way for a packet, or data, to be forwarded to its destination.

Switch – This device, also known as a switching hub or bridging hub, connects local networks together. It typically operates to process and forward frames to destination PCs.

Devices used in testing (mobile, wired, laptop, desktop, etc.) – There are limitations when it comes to using different types of devices when testing network throughput. For example, wireless (mobile or by WiFi) can work in different frequencies and can have interfering channels that can cause network throughput to significantly drop.

ISP Speed – This is generally the limitation set by the ISP, who provides a wide variety of speeds. If you are testing your internet speed (WAN), it will be limited by how much you have purchased.

Ethernet Speed – Ethernet has been around for a few decades and has replaced LAN technologies such as token ring. The standards are from 10Mbps, 100Mbps, and 1000Mbps (Gigabit) and, depending on what type of connection you are using, can drastically change the throughput on the network.

Once you know your equipment's advertised speeds and limitations, you can estimate the maximum achievable throughput.

Speeds can also be limited by the environment the network is in. The following are some significant factors to consider when deciding what kind of throughput you are expecting in a speed test.

Distance is how far away you are from the WiFi access point. Moving away from the device can weaken the connection, especially with wireless testing. It is important to have a good connection to the AP or router before testing.

Noise on the network can be as simple as other frequencies in the air that might interfere with connections on wired and wireless.  Examples can be wireless home phones, microwaves, as well as neighboring network devices.

Traffic can be the current “load” on the home/office network that could throttle the throughput test from reaching its highest potential.

Some questions to ask oneself are:


These are significant factors to consider when deciding what kind of throughput you are expecting in a speed test.

Wired tests will allow you to test the upper limits of the equipment. Since wired connections eliminate many of the factors that can affect wireless speeds, it is suggested to use a wired setup as the baseline for your speed testing.  It’s also a good idea to test when no one else is using the network, as this will provide the best results.  If that's not possible, try testing during limited use. Real world scenarios will most likely have competing traffic, but testing in ideal conditions for the baseline allows for a better understanding of what may be causing slower than expected speeds. 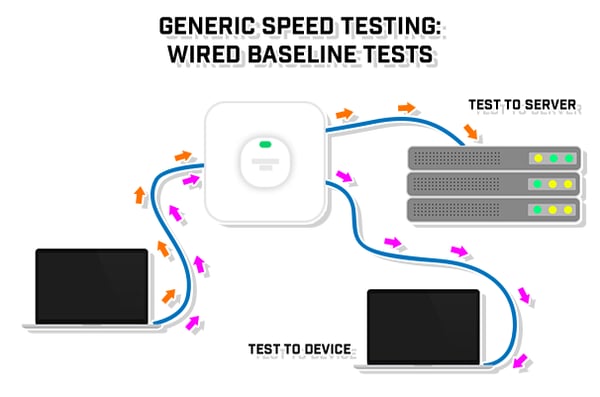 It is recommended to first test from a wireless to wired device so that wireless factors only affect one side of the connection. Once you see the numbers you expect, then you can go on to test wireless to wireless device, which will most likely produce the lowest speeds you will see. 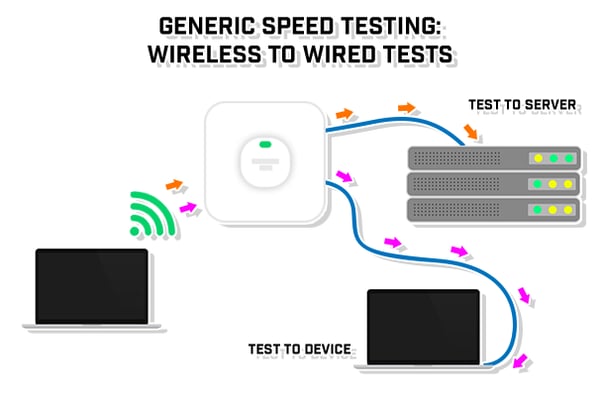 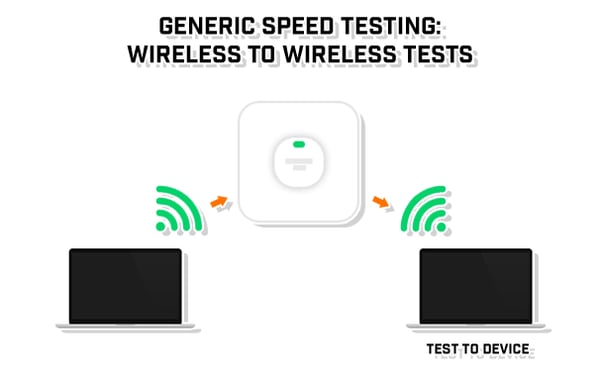 When testing locally, make sure you have expected and baseline speeds that you can compare with actual test data. These are likely to be much faster than internet speed testing. Internet speed testing introduces many factors outside of your control, including your ISP connection speed.

In conclusion, several factors cause throughput to vary enough that it can affect network speed positively or negatively. When considering how the test will help troubleshoot certain problems with throughput in a network, it is important to question whether or not you are getting the speed the ISP offers.