A Brief History of the NASA SEWP Contract

NASA SEWP (pronounced soup) has been around for over 30 years. It started out as a way for NASA scientists and engineers to streamline their purchase of work stations. Back then, the SEWP acronym stood for Scientific and Engineering Workstation Procurement. Later on, the acronym was changed to Solutions for Enterprise-Wide Procurement to better reflect the types of IT products and product-based services available through the contract.

Government-wide acquisition contracts (GWAC) are multi-agency contracts. They offer Information Technology (IT) products and services to agencies across the government. Vendors (prime contract holders) compete for the initial contracts. Once selected, they are eligible to compete further for agency-specific tasks.

SEWP was the first GWAC in the federal marketplace and is currently the largest and lowest fee GWAC. After five iterations, the NASA SEWP GWAC continues to see growth year over year as more federal buyers learn the benefits of the speed and efficiency it provides to acquire commercial IT products and services. AccessAgility has been a SEWP prime contract holder since SEWP V.

SEWP V is the biggest IT contract in the government in terms order volume. SEWP V has over 140 prime contractors, reach the $10B/year in orders milestone in FY22 with 80% going through small businesses, and has been used by all federal agencies.

Below is brief history of the various iterations of NASA SEWP from SEWP I to SEWP V and information about the upcoming SEWP VI contract.

NASA SEWP I (pronounced soup one), the acronym stood for Scientific and Engineering Workstation Procurement.  Because SEWP I was conducted using full and open competitive procedures to award indefinite-delivery/indefinite-quantity contracts, the specific delivery orders placed against these contracts need not be competed as all responsible sources were realistically permitted to compete.

The objectives of SEWP I were:

The SEWP Business Operations and Workstation Laboratory (BOWL) was the support center for SEWP customers. The BOWL provided pre-delivery and post-delivery administrative for SEWP customers. Each order through SEWP I was required to be accompanied by a separate purchase order for the .75% SEWP service charge. 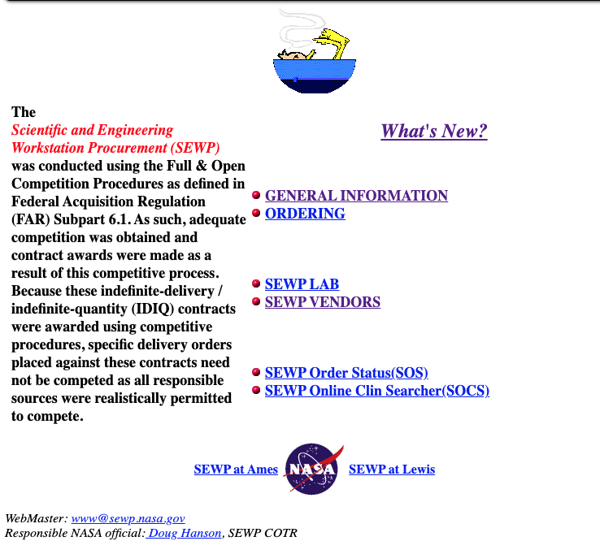 Products from over 550 sub vendors (aka providers in today's terminology) were available through these 13 prime contracts.

Like SEWP I, SEWP II orders were required to be accompanied by a separate purchase order for a .75% SEWP service charge but some agencies and agencies contractors elected to send the surcharge as a lump sum on a quarterly basis.

Government Micro Resources (GMR)
Dynatech Integrated Systems Corp.
Zero and One
Astrox
ECS Technologies (off ramped due to graduating from 8a and reaching award ceiling value during contract period of performance)

SEWP III consisted of twenty-two contracts, including eleven small business contracts, that offered a vast selection and wide range of advanced technology UNIX, Linux and Windows based workstations and servers along with peripherals, network equipment, storage devices and other IT products to all Federal Agencies (including Department of Defense) and their authorized contractors.

Surcharge started at 0.65% and then the SEWP Program Office announced a reduction in the surcharge fee to 0.6%, effective Feb. 1, 2003.

On Nov 20, 2002 it was announced that SEWP III had amassed over 1 Billion dollars in sales! 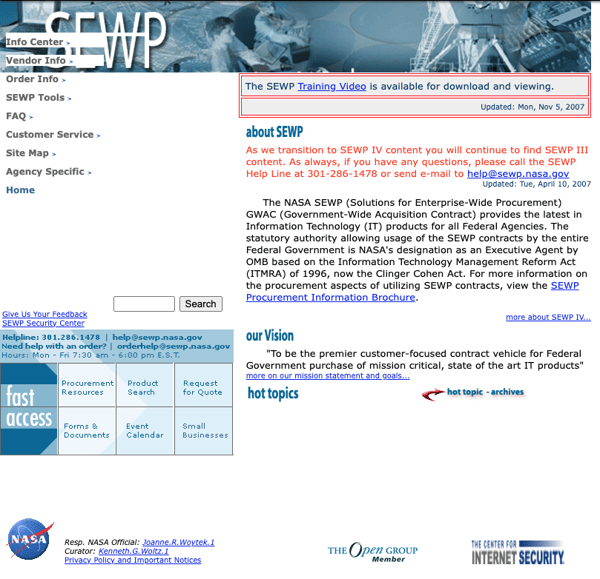 The acronym for SEWP changed to Solutions for Enterprise-Wide Procurement to better reflect the types of IT products and IT product based services available through the contract.

SEWP IV had 37 pre-competed contract holders offering a wide range of advanced technology including tablets, desktops and servers; IT peripherals; network equipment; storage systems; security tools; software products; cloud based services; video conferencing systems and other IT and Audio-Visual products. Product based services such as installation, training, maintenance and warranty are also available through SEWP.

SEWP IV brought in more than $16 billion over its lifespan. 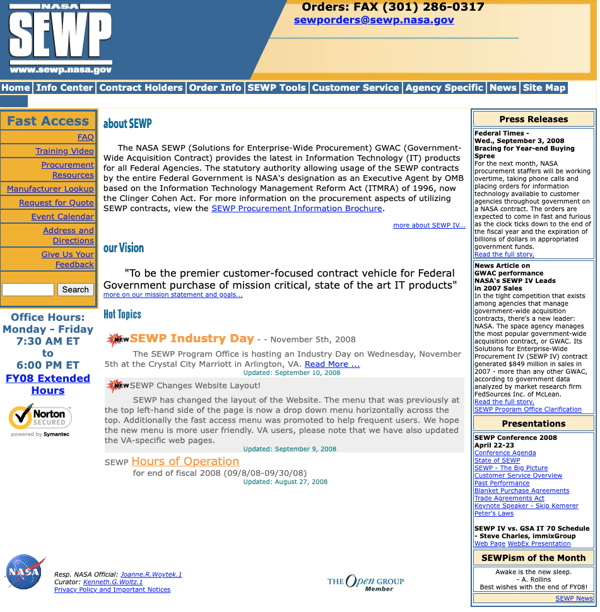 SEWP V consists of more than 200 Indefinite Delivery, Indefinite Quantity (IDIQ) contracts to more than 140 prime vendors, including AccessAgility. The contracts are divided into five groups based on socio-economic status, competition type and NAICS Code:

The primary NAICS Codes include the following:

All SEWP V contracts have an ordering period from May 1, 2015 through April 30, 2025, consisting of a five-year base period with one five-year option period. Each contract has a $20 billion ceiling value. 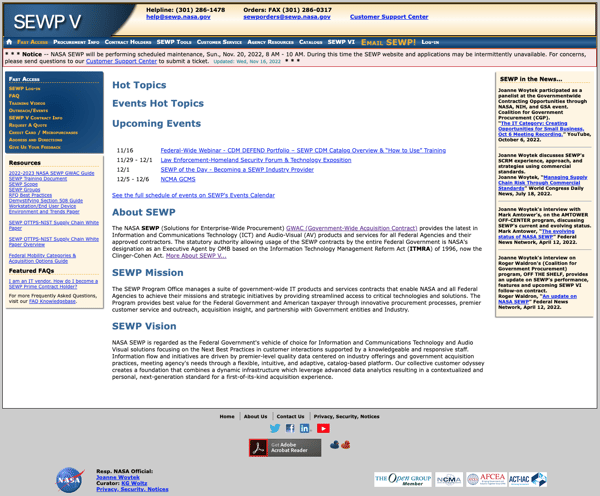 NASA SEWP V contracts are set to expire on April 30, 2025. SEWP VI is currently in the planning stages with a draft solicitation expected in 2023 and final awards some time in the 2025.

The NASA SEWP Program Management Office (PMO) has started soliciting advice on what to add / change in SEWP VI via in person and virtual meeting opportunities. During these meetings an overview of the current intended changes and major points of emphasis for SEWP VI will be discussed, such as:

SEWP VI related information will be posted on SAM.gov and the SEWP VI websites.