The newest WiFi technology - 802.11ax or WiFi 6 - is all about creating a better, more efficient process for the ever denser WiFi environment. WiFi 6 concentrates on allowing more devices to speak at the same time, making APs better at discerning who said what. The APs take on an even more granular command role by setting up wake up times, controlling uplink and downlink connections, and orchestrating WiFi antenna power levels in devices.

Orthogonal frequency-division multiplexing (OFDM) was introduced to WiFi technology to help improve transmission speeds and channel usage. Basically, instead of using the whole channel for each individual transmission, OFDM divides WiFi channels into smaller sub-channels in order to allow a device to send both more and smaller pieces of information at once.

Making the channel usage more efficient is great for when devices have to send large amounts of data, but what about when they don't? Under OFDM, devices still take up the entire channel when they are transmitting even if they aren’t using the whole thing. This means that all the other devices have to wait their turn; the more devices, the longer the wait.

That’s where orthogonal frequency-division multiplexing access (OFDMA) comes in. WiFi 6 is improving on OFDM’s efficiency by greatly increasing it. First, OFDMA allows for much narrower sub-channels, thus creating a lot more them than OFDM. Think of a WiFi channel as a highway and the sub-channels are lanes. With OFDMA, the lanes are now smaller and are able to allow smaller bits of data (cars) to move across the highway. Moreover, larger bits of data can still use multiple lanes without disrupting the movement of smaller pieces of data.

The second major adjustment is a possible game changer. Controlled and sorted by an AP, OFDMA now allows multiple devices to transmit on these sub-channels at the same time. This means that if a device has to send a small bit of information, it can be transmitted at the same time as another device using the same AP and channel. Additionally, the AP has been given uplink control which allows it to tell devices how much data to send and when. The entire WiFi highway no longer has to be closed off for one car at a time. Multiple cars from multiple devices can now use that highway, making it incredibly more efficient.

IOT devices are becoming more prevalent across industries, creating noisier and denser WiFi environments. With this in mind, WiFi 6 has expanded its use of efficiency to IoT devices as well. APs with WiFi 6 can now talk to devices with WiFi 6 and designate a certain time to send their information. The ability to apply a Target Wake Time (TWT) has greatly benefited IoT devices such as sensors and scheduled reporters that don’t need to be on and connected to WiFi all day. The devices can “wake up” at their scheduled time and the APs know to listen for them. Since a WiFi card doesn’t have to be actively associating all day, this improvement has greatly increased the battery life of devices and cleaned up the airwaves of unnecessary recurring noise. 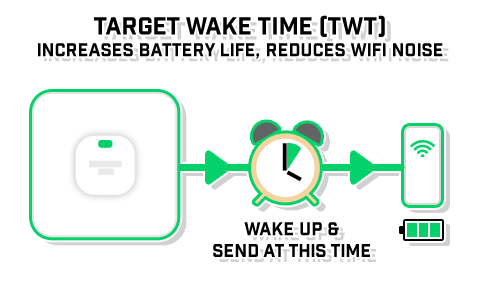 BSS Coloring is a new feature that intends to greatly reduce Co-Channel Interference (CCI) in high density WiFi environments. The idea is that in these high density environments, more APs are deployed to help with the volume of devices. Channel planning is critical so that APs don’t interfere with each other. Power settings for the AP’s WiFi antennas are also critical since they are usually lowered so as to not overlap with each other in close proximity.

BSS Coloring allows APs to assign color codes to devices in order to match them with a close AP and to adjust their own power settings. Since devices don't usually have power setting controls for their WiFi antennas, they shout across the room, potentially interfering with other APs on the same channel. Color codes tell the devices that they can talk softer because they are close to their assigned AP and that other APs can ignore those colors altogether. An added bonus to this feature is that a device with a lowered WiFi power level can increase its battery life. 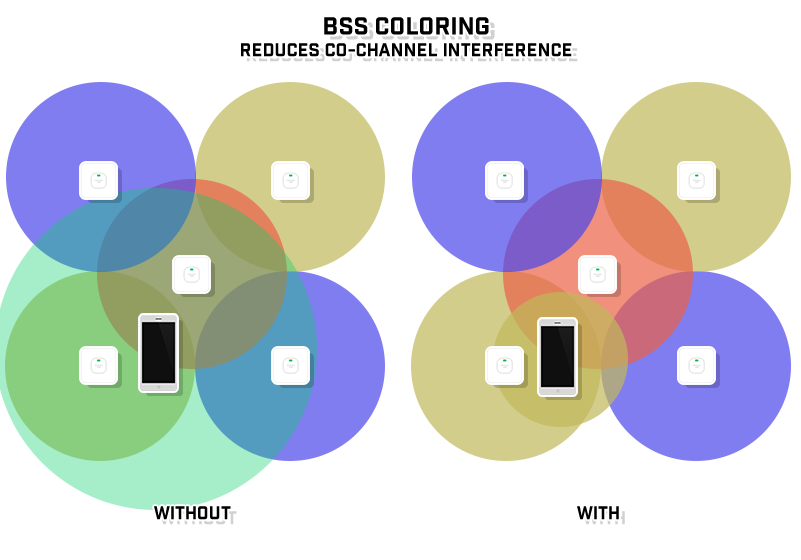 WiFi 6 greatly improves speed, efficiency, and ease of use. Legacy 2.4 GHz channels are brought back with WiFi 6 to ensure that backwards compatibility is available for deployments. This is an important factor as client devices take a while to upgrade along with the WiFi technology.

As with every new iteration of WiFi technology, WiFi 6 beefs up the basics as well. This includes improved 8x8 spatial streaming capabilities, a 1024-QAM modulation scheme, as well as improved channel bonding of 80 & 160 MHz. WiFi 6 focuses on bringing better performance with far greater efficiency.